TALAMONE, Italy — As the Sirena brought its passengers back to port, Paolo Fanciulli paused from spreading his nets and sustainable fishing gospel to point at an empty spot of sea.

“There, below the lighthouse,” said Mr. Fanciulli, clad in his rib-high yellow waders. “The sculptures are there.”

About 25 feet below the rippling surface of this rocky promontory on the southern Tuscan coast, schools of fish visited a museum of four marble blocks, mined from Michelangelo’s preferred quarry and sculpted by acclaimed artists.

Farther north, another 20 Carrara marble sculptures had a different job — as submerged sentries against the illegal bottom trawling that has depleted Talamone’s marine life. 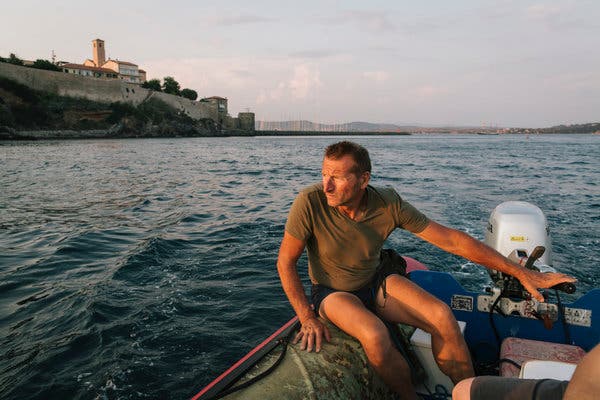 And in a field down the road, where kite surfers skim the bay, 18 more sculpted marble blocks sat like ruins on the grass waiting for Mr. Fanciulli to find the money to lower them into the water.

“Think, in 100, 200 years they’ll find all these sculptures,” said Mr. Fanciulli, called Paolo the Fisherman by everyone around here, including himself.

For his native town, he said, having “the biggest museum in the world to save the sea” would also bring scuba divers and tourists and put Talamone on the map. 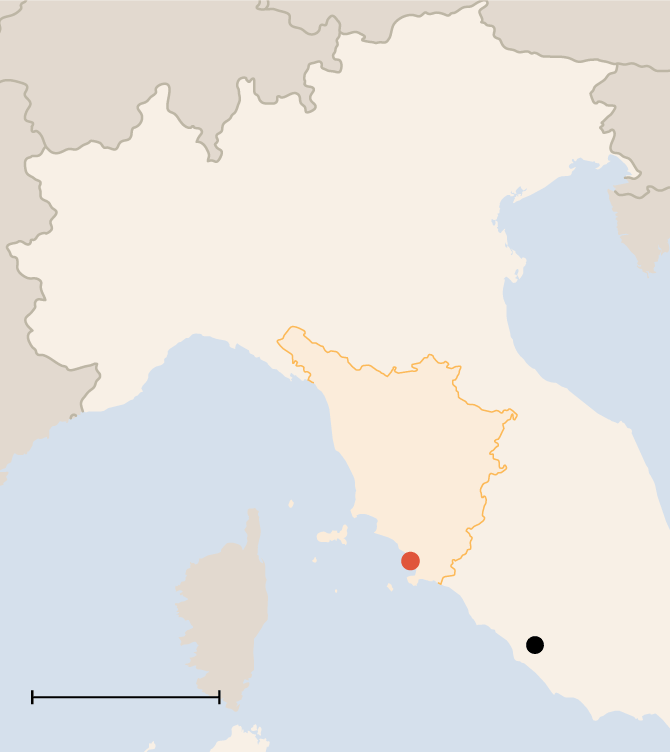 By The New York Times

Currently, Talamone is not renowned for much. The year-round population is about 125 residents. “Maybe less,” said Elsa Ciocca, 82, the town’s baker and unofficial historian. “Because I think two or three just died.”

Local residents are proud that Giuseppe Garibaldi, whose statue presides over a sleepy square, stopped here to pick up ammunition during his historic 1860 expedition to unify Italy. They are less thrilled that arms dealers shipped explosives and land mines from Talamone to Apartheid-era South Africa, Iran-Contra-era Iran and Saddam-era Iraq.

In the summers, the population swells with fashionable vacationers. Wealthy Romans keep their sailboats at the port and gossip in the cafes about which Russian oligarch bought which nearby villa. Tuscan teenagers and retired politicians come to drink aperitifs and dive into the water under the medieval Sienese fortress. Lately, busloads of Chinese tourists have lined up at the port to take sightseeing boats to nearby Elba.

Few are aware that under the water is an art installation designed to resuscitate Talamone’s aquatic life. Mr. Fanciulli, 58, has made it his life’s work to get the word out. 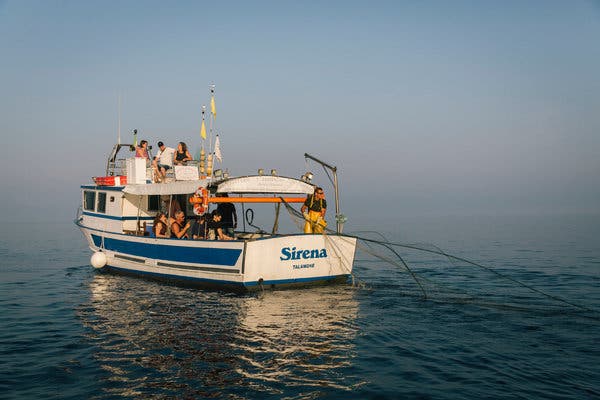 “I’ll tell you all the tale of Paolo the Fisherman,” Mr. Fanciulli said just after dawn on a recent morning as he welcomed aboard his boat couples from Piedmont and Rome. They had each paid 80 euros, or about $88, for his “fishing-tourism” expedition of the Tuscan coast to see the sites, help him fish and eat some lunch.

But as the sun rose orange between the masts of the docked sailboats, Mr. Fanciulli also imparted lessons he had learned through his four marriages (“Fish are like women, sometimes the water’s full and sometimes it’s empty”); shared insights about the local aristocrats (“incredibly cheap”); and ruminated on who would continue his legacy (“After Paolo, who is there?”)

He handed out photo albums documenting his childhood and biggest catches, and binders full of Italian and international press clippings.

“That’s me,” he said to Maria Grazia Moglia, 73, pointing to a photograph in a magazine article headlined “The Brave Man and The Sea.” 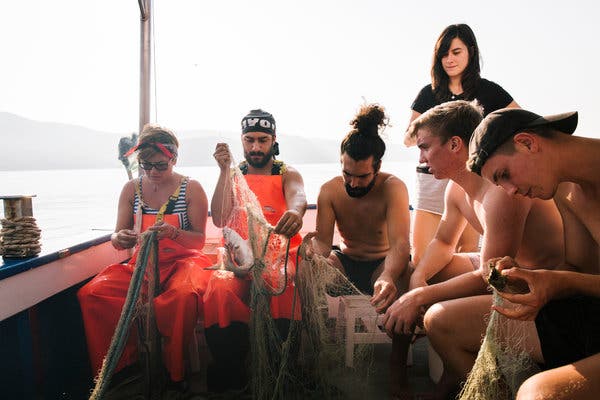 “You ever see me on television?” he asked.

Decades ago, Mr. Fanciulli and his first wife opened a fresh fish store next to Ms. Ciocca’s bakery. It went out of business as the amount of fish in the sea dwindled. He blamed illegal trawling and so he led a blockade of the nearby commercial fishing port. At night, he said, he pretended to be the coast guard by putting sirens on his dinghy to chase illegal trawlers away.

Some people suspect Mr. Fanciulli of dropping underwater bombs to destroy the catches of illegal trawlers, in part because his cousin owns Agenzia Fanciulli, an arms shipper whose website notes that it handles cargo of “strictly confidential nature” and “Imo Class 1 materials,” which are categorized as a mass explosion hazard.

“We do different things,” the fisherman said.

His early eco-vigilantism attracted media attention but also, he said, the Mafia, which he claims sent him death threats and blacklisted him from fish markets. And the illegal nighttime trawling — in which heavy nets scrape the sea floor clean of the grass and plants that are the ecosystem’s lifeblood — continued.

In 2006, with some government support and donations from loyal excursion clients, he financed his project to protect local waters from trawling by dropping a barrier of hundreds of concrete blocks around the seabed. 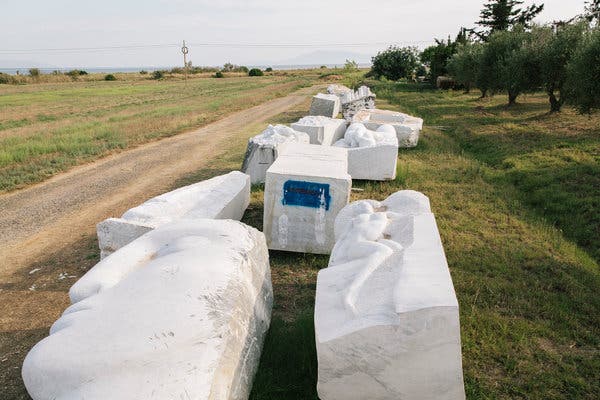 But it was not enough for Mr. Fanciulli.

“I had dreams. I wanted to put works of art down there,” he said as he poured glasses of white wine carrying the “For Paolo the Fisherman” label.

“This label was created by the second wife,” he said. “No, the third wife.”

His underwater art dreams came true when the owner of a Carrara quarry, inspired by Mr. Fanciulli’s vision, donated 100 marble blocks to the project.

Mr. Fanciulli invited sculptors to work the marble. The acclaimed British artist Emily Young carved a 10-ton “Weeping Guardian” face, which was lowered with other sculptures into the water in 2015.

Since then, coral and plant life have covered the sculptures and helped bring back the fish. And Paolo the Fisherman is catching as many of them as he can. 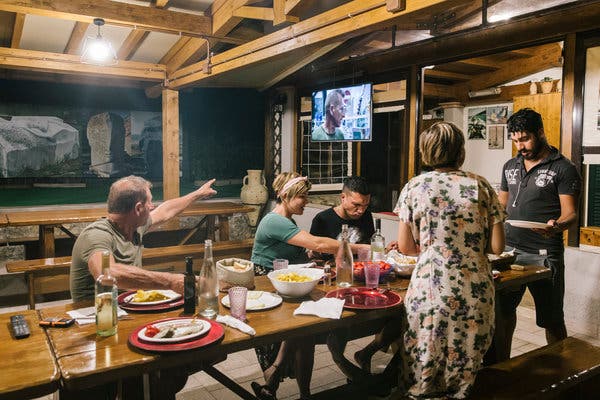 He pulled up his fishing nets filled with yellow-streaked Salpa, striped red mullet, shellfish, a gray triggerfish, seabream and amberjack. He excitedly presented a writhing European Conger eel to his guests and then whacked its head twice on the deck.

“Our anesthetic,” he exclaimed, tossing the sedated eel in a bucket of ice.

A passenger asked if there was tuna out in the waters.

“Sure there are tuna,” he said. “You will taste it tonight. My wife cooks it.”

“Which one?” asked Ms. Moglia.

That night, the Sirena’s passengers joined about 60 other tourists and local citizens at Mr. Fanciulli’s home, which he has converted into a garden restaurant where he grills his fresh catch and promotes and helps fund his project. 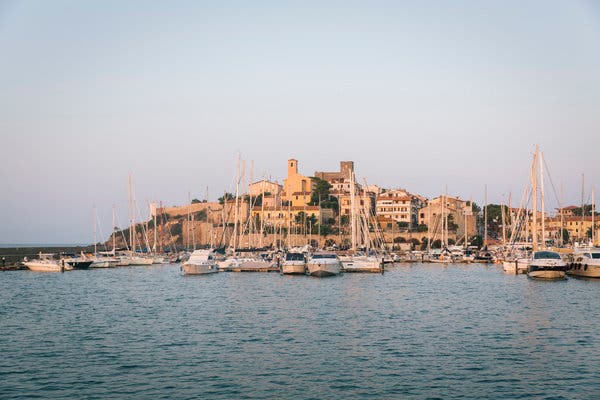 As his current, and fourth, wife, Sandra Galvis, a Greenpeace activist from Colombia, prepared bruschetta with carpaccio of snapper, tuna and mullet fish eggs, Letizia Fanciulli, his 34-year-old daughter, members of the Sirena’s crew, and his first wife, Daniela Fosci, waited on the tables.

“Everybody watch this piece, it’s important!” Mr. Fanciulli shouted, pointing at a large flat-screen television that played hours of national, local and international television news segments, all about him.

There was “The Fight of Paolo the Fisherman,” followed by a segment from China, and then another from Germany’s Toskana.net. A moody, silent black-and-white Bergmanesque Greenpeace short film titled “There she blows” featured Mr. Fanciulli eating fish. There were dozens of interviews of him.

“You saw this one already,” he said, before choosing another. “This one’s great.”

The next morning, Mr. Fanciulli’s daughter and her mother, Ms. Fosci, sipped coffee across from the docked Sirena at the Bar del Porto. Workers there called Mr. Fanciulli “The Famous Paolo of Talamone” and hoped he would bring fame, and business, to the town, especially in the off season. They could count on him to work hard, his daughter said, adding that he spent much of her childhood out at sea.

To better understand why, she said, “ask his wife.”

“Ex-wife,” said Ms. Fosci, who added with a shrug, “His first love was always the sea.”