Could That Be a $3 Million Vase in Your Attic? | Modern Society of USA

For years, there was a maxim that the auction market was fueled by the three D’s: death, divorce and debt.

Natural upheavals powered the supply side of the business, the thinking went. But these days, auction houses are working much harder — and, by their own accounts, smarter — to find material to sell.

They are using technology in new ways and staking out new territory to see if local collectors would like to part with that charming painting, that lovely old watch, that intriguing antique porcelain bowl.

“It has drastically changed,” said Jean-Paul Engelen, worldwide co-head of 20th-century and contemporary art at Phillips, an auction house with headquarters in New York and London. “Communication is quicker, and the market is more transparent.”

Early in his auction career, in the 1990s, Mr. Engelen worked at Christie’s London headquarters on King Street. His first job there, he said, was “standing at the evaluations desk — people would just walk in with their goods.”

The auction houses would like you to know that you can still stroll in, Picasso canvas tucked under one arm. They will make time. “The three D’s are not gone,” said Marc Porter, the chairman of Christie’s Americas.

But auction houses are not relying solely on those sources anymore. Mr. Porter suggested that “there are two additional legs added,” and he kept to the D theme. “One of them is discretionary selling,” he said. “It’s ramped up dramatically.”

The antiquated concept of a collector was someone who amassed things and very rarely sold them; putting up your Rothko even had a bit of stigma attached to it. (What, you’re short on cash?)

“It’s a structural change in the art market; people have so much more access to art and information about art, through fairs and other means,” Mr. Porter said. As a result, collections are less and less “static.”

The next pillar he offered was “digital and communications strategies.” It is no surprise that technology and the internet have changed auctions as much as they have any other business.

Foremost among those strategies are apps for cellphones, particularly consignment tools. Christie’s launched an iPhone app in 2009, and it now allows users to upload a photo of an item, submit an estimate request and create an online account with the house.

It has brought results. A 1949 painting by Marc Chagall, “Bouquet Blanc aux Nuages,” was submitted via the app on June 7, 2018; on Nov. 11, it brought nearly $2.2 million at auction, slightly more than the estimate.

Christie’s has also received consignments that were initiated over Instagram, where several of its staff members have large followings.

And Christie’s is not alone. Sotheby’s introduced an online consignment tool in 2017 and has been impressed by the robust use it has received.

The numbers tell the story: The house reported that last year it received more than 70,000 submissions on the tool from 200 countries; they resulted in consignments to 175 different sales totaling more than $55 million.

Increasing the client base is an important job for any business. And the house is encouraged that 88 percent of the people who consigned an item through the tool were completely new to Sotheby’s.

“We’re trying to eliminate the friction in terms of someone getting an object over to us,” said John Auerbach, an executive vice president at Sotheby’s with a focus on digital businesses.

But it also increases the volume of items to evaluate, and Sotheby’s has a team of people dedicated to that job. Many users of the tool “don’t know what they have,” Mr. Auerabach said. 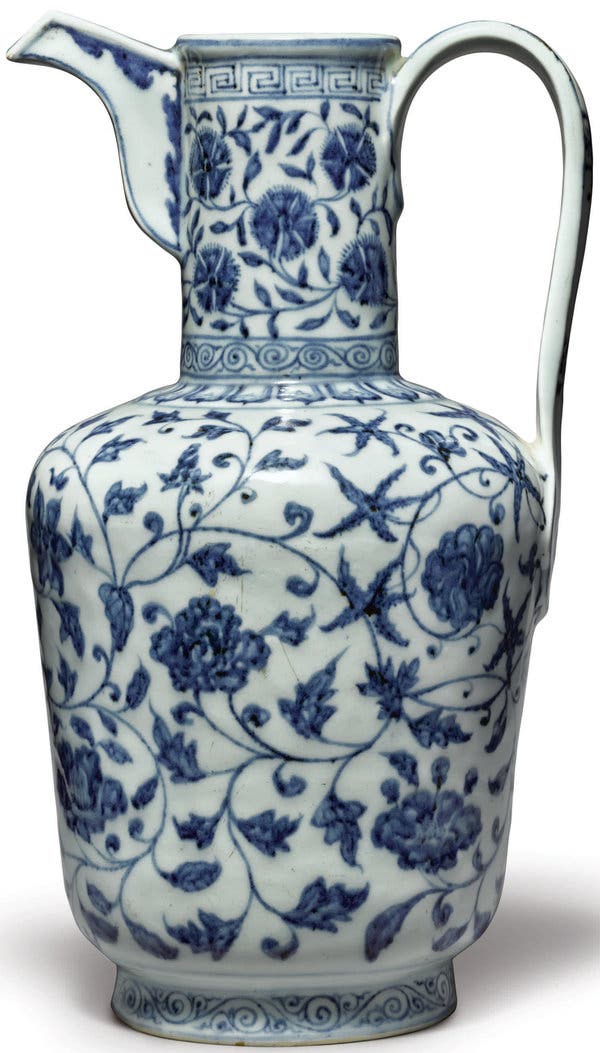 That was the case with a Ming dynasty ewer that sold for $3.1 million in 2018. A client new to Sotheby’s uploaded photographs of other Chinese works through the tool, prompting specialists to begin a conversation that led to a visit to the collector on the West Coast. A dozen pieces from the collection were eventually sold, including the ewer.

Her colleague Mr. Auerbach also saw a benefit beyond the bottom line.

“That’s the beauty of it, the idea of ‘Antiques Roadshow,’” he said, referring to the long-running PBS series in which people have their attic treasures evaluated on the spot. “It’s fun for the clients, and for us as well. It’s great to make someone’s day telling them that the pitcher they’ve been using is worth $3 million.”

Although that is no small potatoes, there may be an upper limit in terms of objects coming in from such apps.

“If you own a $200 million painting, you probably know it,” Mr. Auerbach said.

Auction houses are also trying to expand the map beyond their traditional hubs of New York, London and Hong Kong.

Christie’s has had a Chicago office for 40 years, but this fall will see its first Chicago Week, a series of events scheduled for Oct. 16-19, including dinners, parties, talks and exhibition tours. The idea is to draw out sellers and bidders who might not have surfaced thus far.

Christie’s did the same thing last year in Berlin and will give the program another run because of its success. The first Berlin Week yielded an 18th-century gueridon table once given by Czar Alexander I of Russia to King Friedrich Wilhelm and Queen Louise of Prussia; it sold for around $525,000. 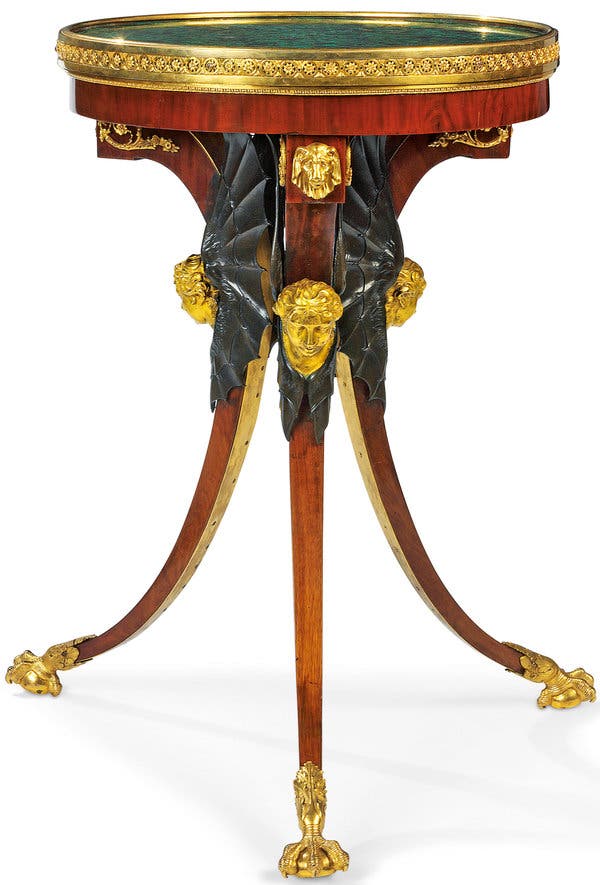 The geographic moves are not limited to the biggest houses. This year, the Boston-based auction house Skinner opened an office in White Plains to better scour the Westchester market, moving into the backyard of Christie’s and Sotheby’s and looking for what the house calls property from “more accessible price points.”

Skinner’s move to the area helped it land a Westchester folk art and outsider art trove, the Marvill Collection. Its 120 lots were auctioned off in November, as the house was setting up its office.

Mr. Porter of Christie’s said there was one additional trend bringing in more consignments, although he ran out of D’s and had to label this one with a P.

The most famous example was the $833 million sale of the estate of David and Peggy Rockefeller at Christie’s in May 2018. It was the largest single-owner sale in history, with the proceeds benefiting charities and nonprofits.

The latest twist, though, is that collectors are not necessarily waiting until after their demise — they want to see the money do some good when they are still alive. 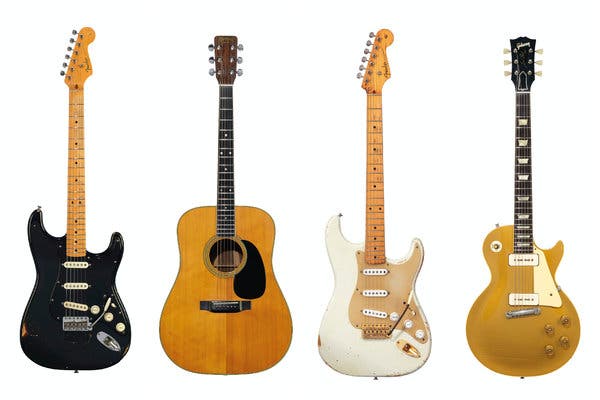 Some of the guitars played by Pink Floyd’s David Gilmour that were sold at auction.

Morton and Barbara Mandel sold $108 million worth of artwork at Sotheby’s in May 2018, benefiting their family foundation. And in June, the Pink Floyd guitarist David Gilmour sold 126 guitars at Christie’s, raising $21.5 million to fight climate change.

Good cause or not, anything that flushes out new material to sell is music to an auction house’s ears.