THE WATER DANCER
By Ta-Nehisi Coates

Ta-Nehisi Coates, whose brilliant essays have helped foster a franker dialogue about race in America, makes his fictional debut with the mercurial “The Water Dancer.” The novel follows Hiram “Hi” Walker, a 12-year-old slave on a Virginia plantation ironically named Lockless, whose many intellectual gifts include a photographic memory.

Hi is the plantation master’s son, and in a turn of events that expresses the perverse, arbitrary cruelty of the slave system, he is called one day to the great house to serve as his own brother’s manservant. But on their way home one evening, the bridge the siblings are traveling over collapses, killing Hi’s brother while miraculously sparing him. Hi’s survival is more than chance. He is shocked to discover himself in possession of a power he little understands, or even desires.

Hi’s near-death experience also clarifies, for him, his own life’s worth. He makes plans to flee Lockless with his sweetheart, Sophia. But things go awry, and Hi eventually finds himself among agents of the Underground, the clandestine network that helps slaves escape to freedom in the North.

In his powers, the Underground sees an enormously valuable asset; in their offer, Hi sees a chance not only to save Sophia but to help undermine and ultimately destroy the bitter system in which so many of his brethren are trapped. And so, a field slave is transformed into a field agent — a transition that proves as exhilarating to Hi as it is sobering, forcing him to confront the limits of his own agency.

Read the review of Ta-Nehisi Coates’s “Between the World and Me,” which Michiko Kakutani called “a searing meditation on what it means to be black in America today.”

As with Colson Whitehead’s “The Underground Railroad,” Coates balances the horrors of slavery against the fantastical. He extends the idea of the gifts of the disenfranchised to include a kind of superpower. But “The Water Dancer” is very much its own book, and its gestures toward otherworldliness remain grounded. In the end, it is a novel interested in the psychological effects of slavery, a grief that Coates is especially adept at parsing.

The paradoxes that existed for both the slavers and the enslaved are skillfully examined. Given wide breadth here, for example, is the practice of raising slaves alongside their future masters, “so that one shall be a queen and the other shall be a footstool.” So too is the indignity of a physical probing on the auction block “by men who gloried in their power to reduce a man to meat.” Coates also explores the conflicts that arose among the enslaved: slaves who spy on other slaves; slaves who betray others for their own advancement.

Especially bracing is Hi’s own waking to the ways in which he has internalized his station. His position as a slave is so deeply ingrained in him that when a well-meaning white person addresses him as if he were a human being rather than chattel, he feels only terror. In Coates’s world, an embrace can be a revelation, rare and astonishing. 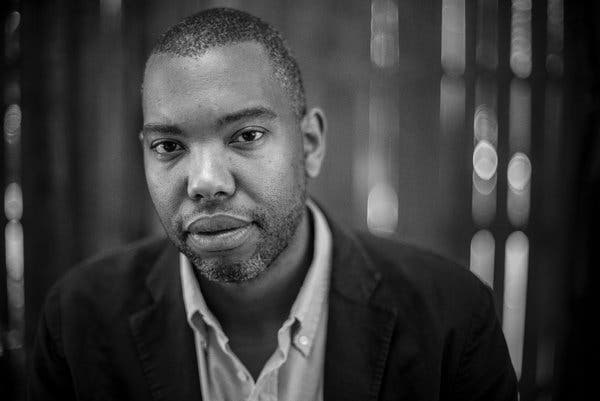 There are some heartbreaking scenes here, as when an older enslaved man recounts how he was severely punished for arson, a crime he committed out of guilt. In his son’s absence, he had taken the boy’s betrothed as his own sweetheart, only to have his son return. The shame of it was too much to bear. There’s also a harrowing scene of a captive 12-year-old boy whose freed mother visits him daily. When the boy is suddenly sold, his mother walks alongside the coffle, weeping in anguish.

Coates explores how the system was upheld by a willful ignorance, the dehumanization of black people perpetuated through a deliberate lack of empathy. To understand is to begin to see a commonality, and to allow such a sentiment to creep in would bring about the downfall of the whole system: “To sell a child right from under his mother, you must know that mother only in the thinnest way possible. To strip a man down, condemn him to be beaten, flayed alive then anointed with salt water, you cannot feel him the way you feel your own. You cannot see yourself in him, lest your hand be stayed.”

It is also true, however, that this is a first novel, and reflects some of the inconsistencies of first novels. The writing occasionally lacks vibrancy, despite its great excitements; the dialogue is heavily expository. Almost without exception, when Hi meets a new character, that person recounts his or her own personal history at length. While we’re told early on that people mark Hi as a listener and are compelled to tell him things, these disclosures still feel strained and unnatural.

But the novel’s few weaknesses are offset by its enormous strengths. When Hi returns home, he feels a kind of estrangement from his birthplace: “It was a funny thing, seeing the country again from this angle. To see the woods I had sometimes raced through, and all the geography I had navigated during the rigors of training. I could see all the birches, ironwoods and red oaks alive in their beautiful fans of russet and gold. The mountains just beyond us, with their overhangs and clearings where the world opened up and you could see the bounty of this deathly season clear for miles. But in my heart I felt the fear of having returned to slave country and that this world now had eyes on me.”

Home, for Hi, ceases to be a place, and becomes a condition, located within those who love him. “I have so rarely been afforded the right of farewell,” Hi thinks, summarizing the tragedy of human entanglements for the enslaved. True intimacy is impossible because the loss of a loved one is inevitable. One loves without possession. But this, Hi suggests, is perhaps for the best — for a human being must never belong to another, not even for selfless reasons.

What are Ta-Nehisi Coates’s 10 desert-island books?

In the end, Hi discovers that despite his own notions of what freedom is, it is not up to him to define it for others. He can’t force his version of liberty on them, even when it appears others are electing to stay in cages. All people must act out their own dreams of freedom: “Ain’t a matter of if they want out,” says one character. “All want out of this. It’s just a matter of how.”

Though Hi reaches a measure of peace, a shadow remains, a bitterness at what will continue. Even an otherworldly power cannot guarantee agency on earth. It cannot undo or correct centuries of injustice. It cannot create a lasting equality.